Asian Institute of Technology (AIT) based in Bangkok is a major contributor of higher education to Thailand, Association of Southeast Asian Nations (ASEAN) region and the world. This essay reviews AIT contributions to developing countries, especially in Asia.
Since its establishment in Bangkok in 1959 as SEATO Graduate School, AIT has supported and granted MS and PhD degrees to over 19,000 selected students in Asia and worldwide from 88 countries. AIT is a successful model of post-graduate higher education institution serving Asia and other developing countries in the world for achieving capacity building and self reliance goals. Figure 1 shows spatial distribution of AIT graduates by country/territory of origin as of March 2012. 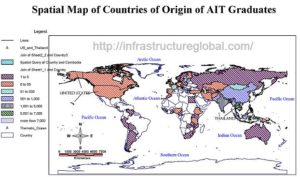 Figure 1. Spatial map of AIT Alumni by country/territory of origin (map credit: Carrissa Beasely, University of Mississippi / data credit: Dr. Tien, AIT) AIT celebrated its 117th Graduation Ceremony on 1 June 2012 in Thailand (Figure 2), another milestone since AIT renewed its status as an international intergovernmental organization. A total of 425 students from 25 countries in Asia, Africa, Europe, and North America were conferred with postgraduate degrees by AIT President Said Irandoust. These new alumni include 28 Doctoral degrees and 397 Master’s degrees in the fields of engineering, environment, and management. 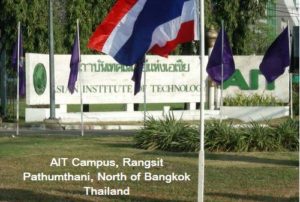 AIT Alumni now reside in 108 countries/territories or more than half of the world’s countries/territories as there are 193 U.N. member countries as of February 2011.
After June 2012 Graduation, there are more than 19,000 alumni and 26% of them are female and 5.4% of them with AIT Doctor or PhD degrees.
The number of graduates of the first 7 years of The SEATO Graduate School of Engineering was only 175.
The number of AIT graduates of from 2001- June 2012 consists of 44% of the total number of alumni. This shows significant expansion of AIT academic program at the start of the 21st century.
Alumni were holding or still hold some high-ranking government offices and top decision-making positions or listed among the richest persons of a country such as:
√ Members of a National Parliament
√ Ministers in a Government
√ Supreme Commander of a National Armed Forces
√ Rector/President of National Universities and International Research Institutions
√ Ambassador of a country to other country
√ Listed among 40 richest persons of a nation
√ Executive Chairman, owner or President of the leading or biggest companies in a country/territory
√ Executive Directors of multinational or international Organizations or companies

Many alumni received prestigious international awards/honors including the Ramon Magsaysay Award.
As per information available there are at least 30 alumni work for top 100 of Fortune 500 companies.
The AIT graduates reside and work in 108 countries/territories (Figure 3). Approximately one-third of these proud AIT alumni have been from Thailand, which is a testimony of AIT’s valuable contribution to the Royal Thai Government. 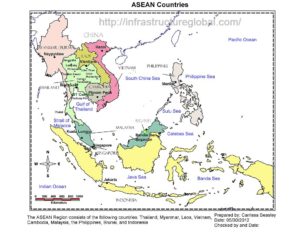 Dr. Uddin’s Note:
I am indebted to AIT where I received my M.S. degree through a full scholarship grant of the U.K. Government. Following several years of experience in airport and road construction projects, I moved to the United States where I was awarded PhD in transportation engineering from the University of Texas at Austin. Formerly United Nations Pavement Expert, I have been teaching, research, and mentoring students at the University of Mississippi in the U.S. since 1992. My specialized professional areas include lifeline infrastructure, transportation systems, sustainability and biodiversity practice in engineering design and construction, and remote sensing and geospatial applications.

This essay is based on my blogpost. http://infrastructureglobal.com/?p=3274
You may be interested in my related blogposts on post flood inspection of AIT campus infrastructure in December 2011 (Figure 5). The spatial maps featured in this essay were created by Ms. Carrissa Beasely, CAIT Research Assistant, during Dr. Waheed Uddin’s Geospatial Visualization Course offered at the University of Mississippi, May 2012. Contact e-mail: cvuddin@gmail.com